Speaking at the opening ceremony of the 2nd Saudi Arabian Oil & Gas Exhibition & Conference (SAOGE), along with other leading international speakers including Dr Randy Gossen, President of the World Petroleum Council, Lord Digby Jones said ‘We are at the fulcrum of the world – where the world is in economic balance. It hinges on the Region that is how important this (SAOGE) is”.

“The greatest challenge for commodity-producing countries in the 21st Century is to use their wealth to develop sustainable, knowledge based economies. So many countries in the Middle East have disproportionately large populations under the age of 30 and social cohesion, fulfilment and global engagement as equals can only be achieved by skilling the people.  The businesses that were the oil companies in the 20th Century will be energy companies in the 21st Century and the challenge is on to develop more environmentally friendly ways of consuming fossil fuel whilst using the proceeds to develop sustainable energy sources and skilled knowledge based economies”.

The event was officially inaugurated by Zareb bin Sa’eed Al Qahtani, Deputy Governor of the Eastern Province. Held under the patronage of His Royal Highness Prince Mohammed Bin Fahad bin Abdulaziz Al Saud, the event attracted visitors from across the world. 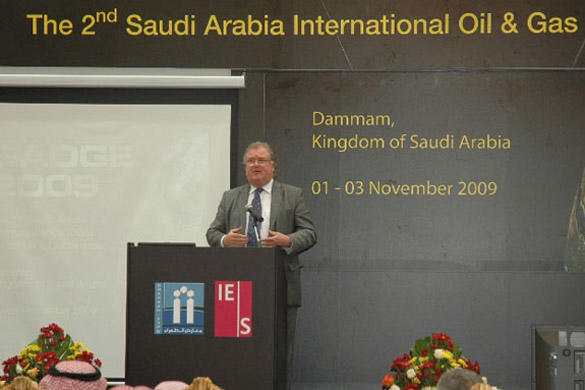