So there I am, sipping my Pimms at a “Last of the Summer” lunchtime party in rural Warwickshire enjoying a glorious early autumnal day
, when over he comes. You know the sort; slightly right of Genghis Kahn, thinks the Daily Mail is a piece of communist propaganda, was delivering the role model for Victor “I cannot believe it” Meldrew years before Richard Wilson was even born!

He refers (thankfully flatteringly) to something he has seen/heard me on recently and then cuts straight to the chase:

Why don’t they “do apprenticeships” in the Country anymore?

Now it might have been the Pimms, it might have been the unexpectedly warm temperature for a Sunday lunchtime in September, it might just have been a sharp reduction in the in-built tolerance level because if you prick me, I too bleed………but I (politely but firmly) let him have both barrels and didn’t come up for air for some time; in fact, it was sundown the following Tuesday by the time I let him get a word in edgeways!

This month, more young people will start an Apprenticeship in England and Wales then at any time since the late 1960’s. In fact, more teenagers will become apprentices this autumn than will start a University Degree. The product of more emphasis, more facility, more funding, more co-operation initiated by the Blair Government, continued by Brown’s administration and added to by the Coalition, the 2014 Apprenticeship Programme is a huge success. At last, British Business (especially in the manufacturing sector) is “growing its own” again. Two obstacles remain:-

1. The attrition rate is too high.     More youngsters drop out of Apprenticeship Programmes than from undergraduate courses and this must be addressed. Partly it has to do with obstacle number 2……

2. This is best summed up by what my antediluvian drinks companion observed whilst asking the question. He explained that his grandson was off this autumn to read something obscure (probably Norwegian Aardvark Sexing; I’d lost the will to live by this point) at some obscure metropolis of academia. I knew that said grandson wasn’t that well-suited to a three-year experience of the World of Academia so enquired why, instead, he hadn’t started an Apprenticeship at a World-class business of which there are many in the West Midlands (Jaguar Land Rover, Triumph Motorcycles, JCB, Rolls-Royce, Bombardier, Toyota to name but a few). The reply was immediate, clear and spoke volumes: “What?! No no no; my grandson’s going to University! He’s going to Uni. He’s going to get a Degree! Apprenticeships are for other kids!”

Until this snobbery, this embedded class prejudice born of ignorance, is swept away by an unstoppable tsunami of quality information and also living, breathing proof of success…… Loads of qualified, hugely employable, fulfilled young people not just in work but, armed with their ticket, always in work……..we will not overcome this obstacle to satisfying the huge need for skilled labour in our Nation.

Our Region is stuffed full of manufacturing exporters doing the business all over the World. At last I hope that the utterly wrong, damaging cry “we don’t make things anymore” is shown to belong to yesterday. But if we’re going to keep it all going, our manufacturers need a constant stream of young people which they will train up; for that, yes, for sure, we need an education system that won’t allow sixteen year olds to leave compulsory, full-time, free education without being able to read, write and count to the standard expected of an eleven year-old (but sadly some 45% still do!), we need parents who take a real interest in what their children are doing and that investment in their futures is more about encouragement, support and tough love as it is about dosh, but……..we need a change in the attitudes of middle-class Britain.

Please……No more snobbery, no more ignorance, no more misplaced sense of superiority. If we are to put the UK ball in the net of a hugely competitive globalised economy UK plc needs more Apprentices…..and it all starts with my new best friend at a late summer drinks party in rural Warwickshire. 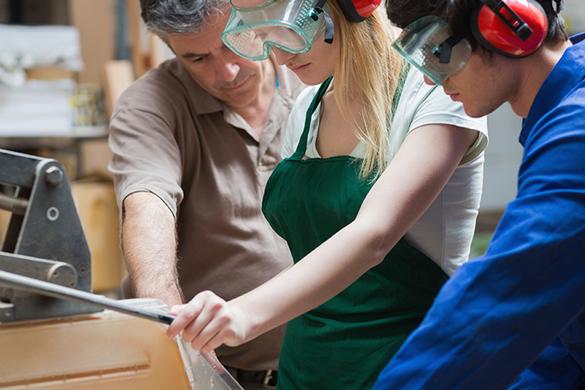