Following an introduction to Arburg UK in Warwick during 2012 Lord Jones was personally invited by the Sales Director Europe, Stephen Doehler, to visit their factory and headquarters in Lossburg within the Black Forest of Southern Germany, where they produce a range of injection moulding machines for wide ranging applications. After a tour of the facility he made a speech to Arburg team and their guests saying “The company is a shining example for German industry” and went on to say that “ we need people like you, who take risks upon themselves, invest long-term, offer people a perspective and make an important contribution to society.  Without people like you there would be no jobs, no taxes and no money for the public purse. Many politicians are unaware of this”.

After his 2 day visit in April 2013, Lord Jones praised the company saying “Arburg is a classic example of a successful business investing in kit and people for the medium term to become globally competitive.  A brilliant example of why it is essential to invest substantially in research, development and innovation.” 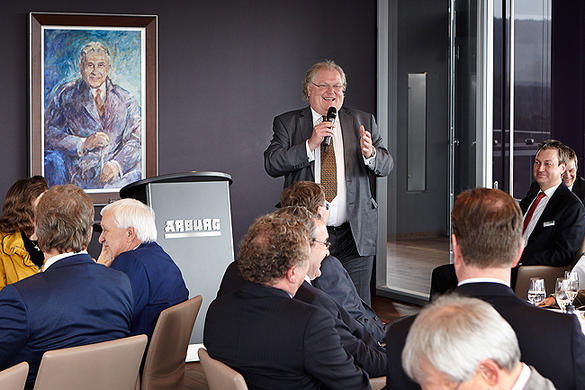