Lord Digby Jones visited Jordan in May 2013 at the request of HM British Ambassador to Jordan, Mr Peter Millett. The objectives of the visit included highlighting the role that the private sector can play in boosting growth and job creation and the value of private sector involvement in government policy, providing a platform for investment and a business friendly environment. During the three day programme Lord Jones met with Jordanian Government Ministers, senior government officials, Jordanian businessmen and women and founding members of the Jordan Strategic Forum. He was also invited to meet with entrepreneurs involved in Oasis500.

Lord Jones comments, “Jordan has a relatively stable, religious and political, environment that stands out as attractive to investors as an oasis of calm in a rather difficult neighbourhood.

I was very impressed with the way women were treated in Jordan. I cannot understand how other countries all around them banish fifty per cent of the reservoir of potential talent for economic growth and development to the hinterland of disregarded irrelevance. I applaud Jordan for their attitude to women both in what they say and what they do.

If the private sector is going to assume a greater role in Jordan’s society, take on a position where it is trusted and understood, then it will need powerful advocates that, on a fully independent, transparently funded, open, socially-engaged basis take the private-sector ethos, the wealth generation for all ( rather than the few, through the corrupt tender procurement of the past ) into a world where every facet of Society from primary education to health care provision is the concern of the private sector.

The private sector is NOT about the corrupt procurement of a Government contract where the profits are contested and the employed are soon laid off. It is about sustainable, locally engaged labour involved in the business in a local community, working hard to make a profit, of course, but making a sizeable contribution to the social and community progression of the locality through a better engaged private sector.

A wonderful, educated, decent, moderate well-trained population just waiting to be even better trained and unleashed on democratic capitalism.”

Lord Jones hopes to follow up on the visit later this year. 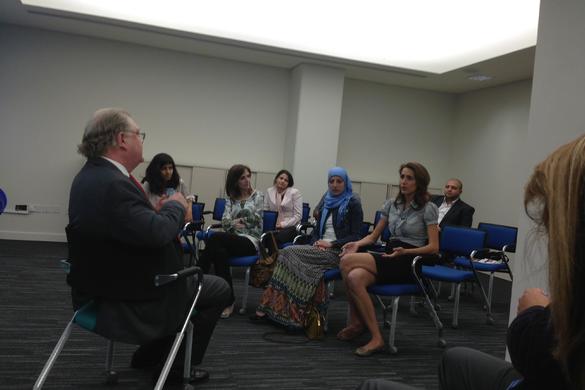