Lord Digby Jones recently met with one of JCB’s top engineers. Alan Curtis, involved with the firm since the age of 16, and who won national recognition for his outstanding contribution to engineering based education.

The Institution of Mechanical Engineers (IMechE) named Alan overall Young Member of the Year 2009. He also won the education category.
Alan, 27, now works with JCB Power Systems and first became involved with JCB as a Year 12 student when he and three others were teamed with the company when they took part in the national Engineering Education Scheme run by charity the Engineering Development Trust.

Alan organises and delivers work placements for students at JCB and has been pivotal in establishing learning modules at the JCB Academy. He continues to support the EES scheme he himself benefited from.

Digby is an honorary Fellow of IMechE. He said: “There is a mood in the country that we don’t make things any more. That is not only untrue but if this nation is going to succeed it’s got to trade its way out of this economic malaise.

“That means manufacturing and engineering and that means exporting. We can’t make a success of value added, innovative, quality engineering if we don’t get a constant supply of committed young people who are skilled and want to add value for themselves in a successful career in the manufacturing base of this country. In Alan we have living proof that you can do this as a young person and succeed.” 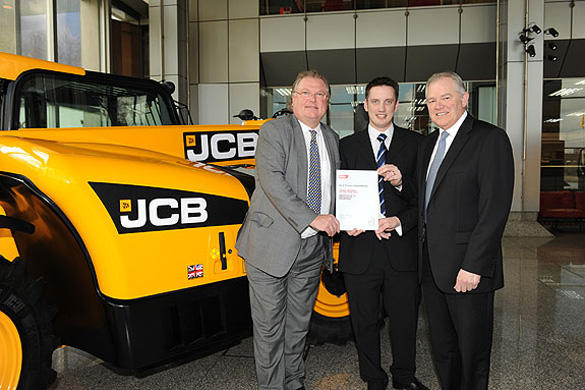