As Chairman of Triumph Motorcycles, Lord Digby Jones was the Guest Speaker at the Annual Dinner of the RAF Prisoners of War Association.

Although the members from World War Two are sadly fading away, there are some from more recent conflicts such as Gulf War One.

Digby learned so much at the Dinner at RAF Henlow and met some true heroes, including a couple of guys who were in Stalagluft Three on the night of The Great Escape. The film of that amazing stab at Hitler’s pride not only immortalised the greatest mass escape of the War but did a fair bit for the Triumph Brand as well when Steve McQueen insisted on riding a Triumph Bonneville for the performance of his motorbike exploits. Evidently he was the proud owner of some 130 triumphs at home and would not get aboard any other make to film one of THE great moments of cinematic history.

The Dinner also celebrated the successful completion of a ride by some ten bikers (all on Triumphs) from RAF Biggin Hill to Colditz via Stalag Luft Three, Poznan and Dresden which raised much needed funds to ease the problems of those brave men and women returning injured from Afghanistan. 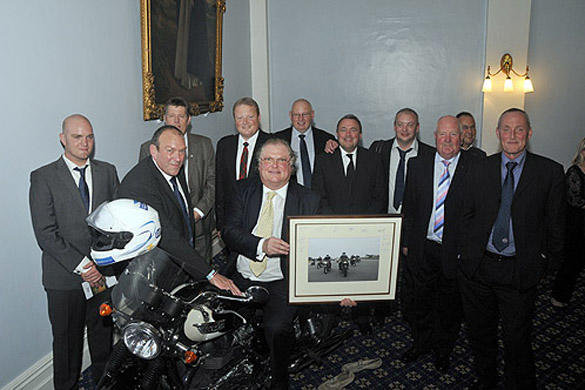