Lord Jones Introductory Speech to the Chancellor of the Exchequer at the Conservative Party Conference 2014.

Welcome to my home town; to the City where I was born (in Kings Heath), that saw my Dad born in Saltley and my Mum in Small Heath. Welcome to the Town that Manchester knows as God’s Own City!

I don’t always get to speak in such salubrious surroundings; during the last General Election Campaign I spoke at meetings of all the main parties, setting out what Business needs from elected politicians. I once found myself in the Community Hall of a suburb of one of our great Northern Cities. It was pouring with rain, the meeting was due to start at seven thirty; it was seven twenty-nine and the audience numbered one!

“Oh well, better get started I suppose” I said.

I did, and the chap turned out to be a great audience; he laughed a couple of times, he even clapped once ……and as I finished I said: “I think I’ll skip the Q&A and I’ll get on my way.”

He said: “I’d rather you didn’t actually.”

He replied:- “because I’m the next speaker!”

I am delighted that such a fate has not befallen me today. Mind you, it was never going to, given the next speaker!

As you all know, I am a cross-bench Peer; non-aligned from the tribalism of Party Politics. Indeed I am the only Minister the Country’s ever had not to belong to the Party of Government. Business is my constituency; the businesswomen and businessmen of our Nation creating wealth on a socially-inclusive basis, to the benefit of everyone.

And that tax goes to pay the wages of the hard-working nurses, the doctors, the teachers, the policemen, the soldiers and the prison officers that we all need so much ………. and they pay tax on it!

But if it wasn’t for the profit that business makes, for the tax it generates, for the jobs it creates…….there would not be one job in our Country, there would be no public sector! That is how vital a successful business community is to a Country.

And it worries me that so many politicians, trade unionists, educationalists, environmentalists and, dare I say it, journalists appear from what they say and do that they just don’t get it; they think it grows on trees!

Businesses, large and small, have every right to expect an elected Government to help create an environment where risk can be rewarded, where investment is encouraged, where we can get our goods to market and our people to work, where hard work and enterprise is welcomed, not set to wither on the vine of regulation from Big Government and to drown in the mire of anti-business mood music encouraged by vote-seekers.

But Business can only expect that right to be respected and delivered upon if it is socially-inclusive in the way it goes about its wealth creation:-

It MUST train its people better and constantly;

It MUST be sensitive to the environment it affects by its actions;

It MUST set an example. We tell a nurse that, sadly but currently rightly, he or she is only getting a one per cent pay rise yet watch some CEOs receive huge bonuses. It is irrelevant that such a bonus is deserved; a bigger pay rise for the nurse would definitely be deserved. It sets a lousy example; period.

For me, social inclusion and wealth creation go together and Business must meet Politicians halfway in delivering it. BUT……..

I want to hear Politicians of all parties saying loud and clear that there is nothing wrong with making and keeping a profit. That in the most globally-competitive economic environment the World has ever seen, where India wants your lunch and China wants your dinner, Businessmen and women are not to be the whipping boys of some populist ideology.

I learned a long time ago that you shouldn’t bank on what politicians say ….watch what they do. Anyone can talk about “getting behind business” or “helping business succeed”. It’s what is actually done…or not done….that matters.

Of course we all want the low-paid to take home more money; but it has to be earned from greater productivity. There is no escape from that basic economic truth. Any other way and eventually it all catches up with you again and we’re off to inflation, increasing deficits and inefficiency. So don’t just give them more of other people’s money……equip them and enable them to earn more themselves. Fund more apprenticeships and banish illiteracy and innumeracy to where they belong…..the dustbin of a by-gone age. I want an end to the disgraceful statistic that has blighted our Nation for decades where (after our taxes have paid for eleven years of full-time, free, compulsory education, from five to sixteen) half, yes half, the young people who leave school at sixteen don’t get Grade C or above in English and Maths. As William Gladstone said all those years ago, and it still holds true today, “You don’t set the poor free by giving them money, you set them free by giving them an education!”

Business needs some help on the job-creation front. The only tax that doesn’t relate to income received or property acquired, held or disposed of, is Employers’ National insurance Contributions. This is my pet hate. The Chancellor is quite right to call it a jobs tax. An employer pays money to the Government just for employing someone, even if no profit is made at all! It isn’t a tax on “the Bosses”; it only applies if someone is employed; no job, no Employers’ NIC. The current NIC allowances for small businesses brought in by this Government are extremely welcome. I hope that all parties will commit to going further until, when the Country’s finances allow, it is abolished. Link its abolition to training more, and especially young, people…..now that would be a win-win!

Above all, I beg, from the bottom of my heart, whoever is our Prime Minister next May, which ever of the parties form the next Government, please please do not wreck this economy.

It is coming down very quickly; it was 7.7% a year ago. The fastest reduction for 25 years.

30.61 million people are in work in this Country … An all-time record.

Our growth is higher than Germany’s, our inflation so low that the Governor of the Bank of England has to write to Number Eleven a monthly letter almost apologising!

After years of sticking to and tolerating unpopular policies, after years of the amazing British workforce getting stuck in and delivering the goods for no extra reward, our Country is on the threshold of reaping the benefits. The Coalition Government should take its fair share of the plaudits for that. But we are not completely out of the woods yet; the number of the economically inactive isn’t falling; pay rises, except in manufacturing, are not yet filtering through, and they need to…..and quickly……so everyone feels that they are sharing in this new, beneficial economic vista.

Please politicians, don’t mess with our Economy. What we have is just too precious to be gambled with on the altar of experiment or tribal ideology.

So let us now hear from the Country’s Finance Director. I am sure he has much to say to everyone in our Country including the women and men in our Business Community who are vital to the future of all of us.

The Man with the Plan…..and it worked!

Kipling’s “If” has the wonderful line “If you can trust yourself when all men doubt you”. Politicians, commentators, economists…….they were all saying you were on the wrong track, but you stuck to your guns, ignored the unpopularity and did what was right for our Country. A personal pat on the back for that. 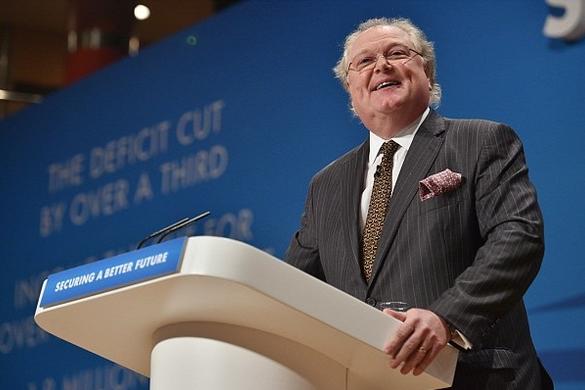